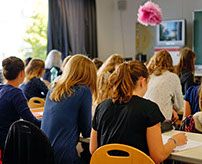 The different concepts of “the American Dream”, the bright and the dark side of the dream, lives of immigrants, differences within the particular groups (immigrants, black people, …), American culture and Europe

The history of black people in America, the fight for equality (e. g. Martin Luther King, Malcolm X and other leaders of the civil rights movement), human rights, forms and roots of prejudice, mixed marriages, immigrants’ lives (in America, in other countries)

The fight for equal rights and opportunities, prejudices regarding women, role stereotypes, education and role patterns in history and now, differences between industrialised and developing countries

The techniques and function of ads, psychological effects, pros and cons of advertising, examples of good and bad ads, sex in ads, the role of women in ads, consumers’ rights

Role of the media, quality of information (newspapers, magazines, TV, …), how you keep informed

Learning disabilities, autism, cerebral palsy, the position of people with disabilities in our society

Reasons of addictions, effects of drugs, legal and illegal drugs, the legalization debate, advertising and legal drugs (alcohol, smoking), the issue of happiness

Historical and political background, the background of the Northern Ireland Conflict,  the different regions, every day-life in Ireland, characteristics festivals, the Irish pre-school system

Family, marriage, other forms of living together

Describing the system of pre-school education in Austria, comparing the Austrian system to that of other countries, specific vocabulary

Great Britain and the United Kingdom

William Golding: Lord of the Flies

Harper Lee: To Kill a Mockingbird

J. B. Priestley: An Inspector Calls

J. D. Sallinger: The Catcher in the Rye

John Steinbeck: Of Mice and Men, The Pearl

Arthur Miller: Death of a Salesman

Fay Weldon: The Life and Loves of a She Devil

Joan Lingard: The 12th Day of July, Across the Barricade

Ernest Hemingway: The Old Man and the Sea

Marlo Morgan: Mutant Message Down Under

Caroline B. Cooney: The Face on the Milk Carton